“the long and winding road”

Since the process itself is so involved, these  transition  posts will come in  segments.

When I say it is a slow transition I am talking years!  Like I said mom and I  have been together for a long time and the subtle things I started noticing were the forgetfulness and repeating things.  But those are the things that happen to all of us as we age.

One of the most admirable traits that mom has is her ability to laugh at herself over anything… and over stupid mistakes or messing up a recipe or forgetting a birthday…. I always wished I was more like that.

One day I had come home from work and she said “oh I got lost today,” and she was giggling in that way that she does when she has done something (for lack of a better term) wrong.  So of course I said “lost, where, how?”  So she started to explain that she took a road that she had taken many times before as a short cut to get home from down town but it took her out to the main road.  She said she finally recognized where she was but  she could not figure out what went wrong.

First of all that road was not at all a shortcut to our house and we had not taken it….. really very often at all.  I actually tried to explain that to her and she insisted that she was right.

So this is a little scary, not just the getting lost part but the insisting that she was right part.  So now I am thinking,  how do I handle this situation?  What if she didn’t come out to a spot she recognized?  Do I try to explain to her again that she is mistaken?   So what did I do?  Well that day I ignored it!   Don’t get me wrong, I thought about it but I did not do much more than that. She did have a cell phone, so I figured if worse came to worse she could call me or the police if she had to.

That was 6  years ago.  Since then,  she no longer drives no longer has a cell phone.

So you might think this is about her driving but it is not,  because at the time I was actually thinking about her memory and not thinking too much about the driving.

My brother Rob, came to visit. 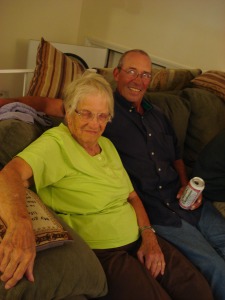 One thought on “The Transition (1)”